There are many Gods of Travel, but here we are talking about the Ultimate Explorers – Our Ancestors- The apes, The Early Men, The Homo Sapiens.

Today we know our earth, it is round!
covered with 70% of water and rest of land. We know the world map, countries, cities, towns and routes to reach them!

Now imagine yourself in a jungle.
No idea how vast it is, who and what dwel all here.
How far is that big shiny ball which comes from & goes into the water

Early Men were wild, afraid, curious and hungry. Exploring and experimenting seemed the only way to unwind the mystery.

Our evolution history begins some 2,00,000 years ago, Thechart below shows us the Evolution timeline with species name, their features and  specialities.

As Homo Sapiens, we started originating in the East of Africa. It can be said that we are the African gene where we stayed the highest and started evolving to modern man. Other species like homo erectus &amp;neantherdals are said to be extinct, the probable theories for their extinction are severe climate shift, the fight of survival of fittest, Volcano eruption, Reproductive errors etc.

Around 70,000 years ago, a group of Homo Sapiens/ Humans first migrated out of Africa. One of the main suggested reasonsthat triggered them to move out isthe major climate shift resulting in Ice Age. Earth was cooling suddenly and species were finding it difficult to survive. Severe Freezing weather and extremely less precipitation hugely affected the earth’s flora, it is suggested that even in the huge rain forests like amazon, the rainfall could be diminished by 90% to present. With distinguishing flora, the nomadic hunter lifestyle of early men can be imagined.
There are evidences even suggesting the major drop of human population with as few as around only 10,000, we were near our extinction!We had to start to move out. 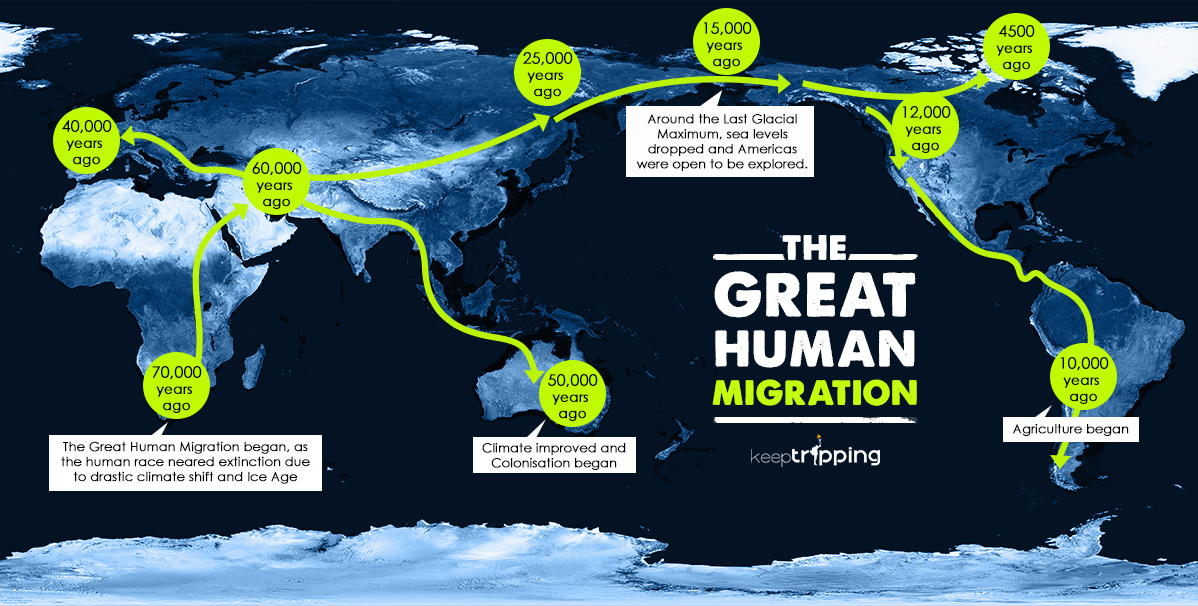 The Great Human Migration had begun and so the history of travel. The intrepid explorers started travelling extreme distances to survive and stay protected from other wildlifes.
Once the climate started to improve after 100s of centuries, the population expanded and we began colonising- landmasses of Europe was the very first way-through.We then expanded rapidly along the coast to India, and reached Southeast Asia & Australia by 50,000 years ago. In next 30,000 years humans reached out to Middle East and southern Central Asia and also colonised the remaining landmasses of Europe and southeast Asia. Next America was to be found. It was around 20,000 years ago, a foray of explorers went beyond their limits & life and dared to head towards Asian Arctic region with heavy snow, storm and glacial earth. This is supposed to be known as the last glacial maximum. With reaching onto North America, even the Earth’s odd were in our favour of exploration. The sea levels were dropping tremendously by this time, the new surface land acted as a bridge between Asia and America & between North and south America. By about 10,000 years ago every major inhabitable landmass on Earth supported human life.
Voyaging, Inland Trekking, Hunting, Adapting and Expanding in new Environments, We knew it all.

The next was Agriculture Revolution!
Ice has melted, precipitation allowed rainfalls, earth’s flora was blooming rapidly. The new humans learned to grow and bowed the very first seeds of Agriculture in parts of Egypt, Syria, Israel, Lebanon.Agriculture led us tosettling in one place discarding the nomadic-hunter lifestyle. The population explosion & civilization cultivated simultaneously.

Humans were not just surviving, they were living!
It was the time for inventions& innovations. Sailboats, Wheels, the concept of area mapping came into existence. People Started to travel for exchange of knowledge, trading, farming, therapeutic &artististic purposes. Travellers acted as the bridge between far flung places for connecting Population and transferring ideas. Travelling was seen as a respected skill which connected the world all together.
Yet today, we still need the world to come altogether, redeveloping Travel as a culture could be a big step in this direction.